Good morning everyone! How are we all? I have been writing on a fic I’ve not updated in years! It’s the sequel to The Vessel. I’ve also been job hunting. Seriously thinking of retiring. I just don’t have the energy to go back into the classroom, to be completely honest. They’ve taken the joy out of teaching. They really have.

I read quite a bit this month. Shall we?

The first three of the Queen Alpha series. VERY good! The first born of twins, her brother kills their father, takes the reins of the country and claims she killed him. She goes on the run, is rescued by a trio of faries, who send her on to look for one good-looking rogue. There are more of these. Thank you!

Beneath the dark streets of London they played a dangerous game with trains. Now it is their only chance for survival… Britain in 2075 is a dangerous place. A man known only as the Governor rules the country with an iron hand, but within the towering perimeter walls of London Greater Urban Area anarchy spreads unchecked through the streets. In the abandoned London Underground station of St. Cannerwells, a group of misfits calling themselves the Tube Riders seek to forget the chaos by playing a dangerous game with trains. Marta is their leader, a girl haunted by her brother’s disappearance. Of the others, Paul lives only to protect his little brother Owen, while Simon is trying to hold on to his relationship with Jess, daughter of a government official. Guarding them all is Switch, a man with a flickering eye and a faster knife, who cares only about preserving the legacy of the Tube Riders. Together, they are family. Everything changes the day they are attacked by a rival gang. While escaping, they witness an event that could bring war down on Mega Britain. Suddenly they are fleeing for their lives, pursued not only by their rivals, but by the brutal Department of Civil Affairs, government killing machines known as Huntsmen, and finally by the inhuman Governor himself. 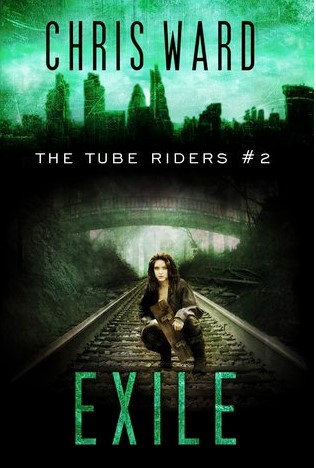 Having narrowly escaped the Governor’s savage Huntsmen, Marta Banks and the other surviving Tube Riders are on the run in northern France. Trapped inside a government-assigned quarantine zone, they search for a way out of a bleak countryside littered with abandoned worker robots and haunted by sinister monks, while at the same time a far deadlier threat than any they have faced before is searching for a way in …

From the towering spires of Mont St Michel through the dark horrors of the Paris Catacombs to the treacherous peaks of the French Alps, The Tube Riders: Exile is an epic continuation of Chris Ward’s Tube Riders series.

There are 2 more of these, I’ll get to next month. Prolly.

Nearly ten years after the unexpected return of the starship Phoenix, the alien atevi have three functioning space shuttles, and teams of atevi engineers labor in orbit to renovate the space station. But these monumental advances not only add a dangerously powerful third party to an already precarious diplomatic situation, but rouse pro- and anti-space factions in atevi society to incendiary levels. To help negotiate these treacherous diplomatic waters, Tabini-aiji, the powerful head of the atevi’s Western Association, has sent the only human he fully trusts into space: his own paidhi, Bren Cameron.

However, the threat of possible invasion by hostile aliens who attacked Phoenix’s station in a far-off sector of space hangs over them all. And when one of the senior captains of the Phoenix confesses that this station was not completely destroyed, as had been previously thought, the crew mutinies. How can Bren hope to mediate on a station overcome by a rebellious crew intent on taking the Phoenix on a rescue mission back into hostile alien territory?

Exhausted from a two-year rescue mission in space, the crew of the starship Phoenix return home to find disaster: civil war has broken out, the powerful Western Association has been overthrown, and Tabini-aiji, its forceful leader, is missing. In a desperate move, paidhi Bren Cameron and Tabini’s grandmother Ilisidi, the aiji-dowager, along with with Cajeiri, Tabini’s eight-year-old heir, make planetfall and succeed in reaching the mainland. The brilliant and forceful Ilisidi seeks refuge at the estate of an old ally, and Tabini-aiji arrives at the door.

As word of Tabini’s whereabouts circulates, clans allied with Tabini descend upon the estate, providing a huge civilian presence that everyone involved hopes will deter impending attacks by the usurpers. But as more and more supporting clans arrive, Bren finds himself increasingly isolated, and it becomes clear that both his extremely important report of alien contact in space, and even his life, rest on the shoulders of only two allies: Ilisidi and Cajeiri.

Can one elderly ateva and and eight-year-old boy—himself a prime target for assassination—protect Bren, a lone human involved in a civil war that most atevi believe he caused?

Tabini’s 8 year old son is quite the handful! His is a welcome new point of view.

Demoted to the Omega.

Another phone read. Poorly written. This is the 5tth one I’ve read and none of them are worth anything. Needed editing badly

So – 12 books this month. Thar ya go. You’ve read all this, please have some Richard.