into the storm, Richard Armitage

Okay – so first off, right off the bat, I am NOT an extreme weather avid movie goer. I’m not. I lived in Oklahoma my formative years and I’ve spent a fair amount of time in a storm cellar. I remember at the ripe old age of 9 looking out the back huge family room picture window, into the open field behind our house and asking my mom if clouds had tails. This one had 4. My parents had all four of us kids out and around the to storm cellar in nothing flat. When Spawn was a baby, the rain woke me and my mom up and we stood in his room and listened to the train that ended up being a tornado that took out one of the greenways and a house, along with several trees, that was across the street from our sub-division.

I like comedies. Or romantic stuff. Or Sci-fi and Fantasy. Star Wars. Tolkien. Harry Potter. That kind of stuff. I am NOT an extreme weather movie fan.

But my son is. My son LOVES that kind of stuff. He’s worn out THREE vids of Twister. Really. He could probably recite the entire script from beginning to end. When whatshisname died a few months back who was in it – he was desolate. Completely.

And truthfully, he holds ALL extreme weather movies to the high standards of Twister.

According to him, Into the Storm surpassed it. And I agree – it was really good.

Of course I went to see it for one reason and one reason only. Had HE not been in it, I would have suggested my son take a date. But… HE was in it. So I was happy to go.

So was someone else…. 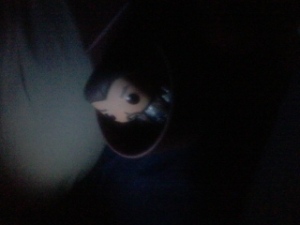 You will fall in love with this damaged family, who has real issues that many of us can relate to.

No really. Where is the popcorn? Why am I in this silly circular seat?

And then there is Donk and his insane friend. Really. Stay to the very end. The VERY end.

Richard’s Mid-west American accent isn’t bad. He’s grumpy. But he also did excellent convincing us he was beyond concerned and really terrified for his son, who is NOT real happy with dad at this time.

And then we had…

Yeah and by the boo-koo. Excellent and realistic affects.

I’m not an extreme weather movie fan. Spawn will take a date next time he sees it. The theater was 4/5ths the way full, we got there just as the previews were coming on and we still had good seats at the top where we like. But there weren’t many open seats – except the few down in the bottom where one gets a bad cricked neck and sees pretty much nothing but nostrils on the big screen.

But I liked it and I’ll go see it again. And so might Thorin.

He liked it too!

4 thoughts on “Into the Storm review”